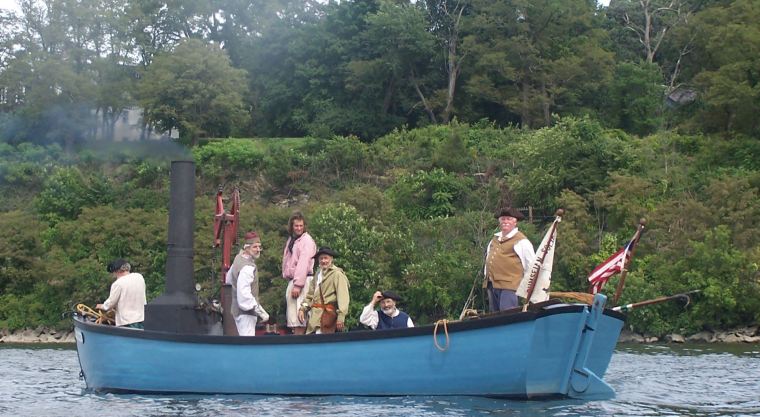 The Rumseian Experiment on its last voyage: the Hudson river on the bicentennial of the launch of Fulton's first steamboat .

This might be too long to read, but where else would you read it?

The Rumseian Experiment project was started in 1984 by Shepherdstown native Jay Hurley.  James Rumsey’s steamboat was a thing of legend in Shepherdstown, and a thing of mystery.  It had only been run a few days, and had been taken apart soon after, the machinery hauled to Philadelphia for display and soon disappearing, the hull abandoned in a mill pond. Good descriptions existed of the demonstrations, but not of the boat.  Steamboat history had long been afflicted with lawyers, and much of the written record was biased and fanciful. It was time to figure out what Rumsey had done.  Jay had a line-shaft machine shop in the back of his store, space for a 24’ boat hull, and a strong desire to make a steamboat by September

Re-creating a long-vanished steamboat is a fun idea, and it drew in a wide selection of locals and non-locals, skilled and unskilled, old and young.  Jay Hurley ( at  left in this photo ) went out and enlisted volunteers, and do

nations of money or materials. His shop was open at all hours.  Noted marine architect Bill Hunley contributed an excellent strip-planked hull design that was to prove very stable and solid. Bill also  oversaw the laying of the keel and setting of

and floors, and made many drawings of key components.  Blacksmith Dan Tokar forged many parts, I made casting patterns and machined pieces.  Local lumberyards donated wood and nails, cabinet maker Dave Wheeler milled hundreds if not thousands of

feet of cedar strip-planking, DuPont donated paint…and a valiant gang of Leechburg , PA handymen  appeared and helped…it would take a lot of space to list all the people who lent a hand, but from the ones who stayed in the shop for days on end to the guys who stopped by after work everyday to just sand for an hour, there must have been around 100 people helping to build.

It turned out to be a far more complex matter, to build an operational  Rumsey steamboat.   Rumsey had left parts out of his drawing of the engine, and had drawn others out of scale. He had never sweated the details, or bothered with an instruction manual. By August of 1987 we knew we were going to have a lot of further research and experimenting, in order to make the boat work, and on the September day we were to have it running, it wasn’t.   We realized that we had to 1) discover the configuration of Rumsey’s original machinery 2) figure out how it could be run and 3) assess whether it could work or not. Done by a part-time crew, this took years.

For the configuration,  some things were easily discovered and fixed. The air pump was too small, and was replaced. The condenser barrel leaked enough to swamp the boat, and so we made another condenser .  The trunkline turned out to be far too big, so we added smaller aperture, to make a jet of higher velocity (and when the greater trunkline pressure created a leak big enough to swamp the boat;  we sealed the trunkline better). But some fixes took a very long time.  The replacement of an anachronistic drop valve with the simple large turncock that  Rumsey employed for a main control valve required making casting patterns,  getting  brass castings  made and then  machining them.  The addition of the automatic valve linkage for the turncock  (vaguely mentioned by Rumsey but never described) easily required a hundred hours. 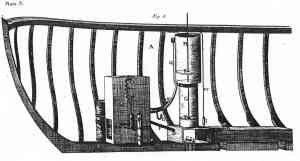 Rumsey's only drawing of his steamboat. It leaves much to the imagination

Figuring out how to run it took practice. Practice meant launching, and launching – and hauling out- were not easy. The Shepherdstown boat landing is steep, the ramp does not extend far into the river, and the current there is significant.  Preparations for a run took around 90 man-hours.  Launching the boat into the Potomac at Shepherdstown  – and pulling it out- needed a truck with good traction, good river conditions, and a minimum crew of  five guys who were fit and could curse fluently.  Once we had steam,  we would often go somewhere….but only with a lot of effort: with manning the feed pump and with dumping river water in the condenser, with pumping out the bilge,with  keeping up a fire in the boiler, with yanking on the air pump rod when it jammed, and with the crew generally clambering around over the thing like ants and smoke billowing from the stack.   Constantly attended,  the Experiment would make an uncertain four knots on the water.   If the current was flowing at six knots, of course we’d be working like crazy to go backwards down the river at two knots.  And  there was the maddening phenomenon of function being inversely proportional to publicity.  If no one was around, the Experiment behaved itself beautifully.  If a camera appeared, it started acting up; if a TV truck appeared, we’d be dead in the water for hours.

Over time, as we got a better idea of how to run it, the design shortcomings and strengths became apparent. The boiler worked well.  Other than the air pump sticking, Rumsey’s pumps  presented few problems other than needing frequent cleaning and swabbing with oil. The flapper valves in the trunk seldom were clogged or jammed. The greatest problem was that the  main control valve never functioned well; the turncock would stick when hot ( the poppet-valves used by Watt would not have done so) and a sticking main control valve meant that the automatic linkage seldom worked. In short, the engine never cycled itself well.  It is quite likely Rumsey’s original had  someone manually turning it, cycling the piston up and down.

Whenever we were struggling with the machinery on the river , a bass fisherman or other kindly soul  would often  drift by and suggest we add a hidden outboard or other modern device, so we could actually go places in a hurry.     It was well meant, but it was pointless.  After a while, we all knew how we could build a better Rumsey steamboat. With English technology of a poppet control valve and  double-acting steam cylinder circa 1795,   we knew we could go places and have much more fun….but that wasn’t the point. We were re-creating Rumsey’s original boat, trying to see what it could have done, and creating another steamboat would have proved nothing.

Over 20 years, from 1984 to 2004, the active Rumseian Society volunteers dwindled to a handful.   Hard to run and exhausting to take out on the river, the Experiment took its toll. By 2006  it  was also showing some age.  Rot had spread from the stern, a survey discovered  in 1995, and had been beautifully fixed by Joe Youcha and the crew  at the Alexandria Seaport Foundation.  But still, the boat was looking well-used.  People visiting the boathouse often thought that the boat actually WAS the original from 1787.  It was time to stop. We bought it up to the Hudson river in August of 2007,  and steamed in front of Fulton’s home, Clermont, 200 years after his steamboat had made its debut.   And then we brought the Experiment home.

After years of trials, it was obvious that Rumsey had taken on a very big task, and wasn’t quite able to finish it. Unlike his rival John Fitch, he didn’t try to simply replicate a Boulton and Watt steam engine (  available only in England) and unlike Fulton 20 years later  he didn’t simply import a Boulton and Watt engine.  With no experience of steam engines, he had instead tried to invent  one.    Considering the task and his time and resources, he did not do too badly.  His prototype did go. He solved one difficult problem very well- creating a very small-sized steam engine able to power a boat. His was likely the smallest 1 hp. engine in the world at the time, and his later engine designs were smaller.  His strong and efficient water-tube boiler, that was key to this, would also become a standard feature of later engines.    But Rumsey does not seem to have been aware of James Watt’s research on heat, and this lack of understanding of heat was a major impediment in this and his future steam engine designs.  Anyone with experience with steam engines  would never have used a simple turncock for the main control valve, certainly never would have expected it to be cycled automatically, and would have made the steam engine double-acting, to conserve heat.    Another lack of understanding was that of turbulent flow; if you shove water around, lift and stop it, shove it back down, force it around bends, etc., you get energy loss from turbulence.  Rumsey only thought he had a simple problem in Newtonian physics, where you only need to know how much a gallon of water weighs and how heavy your boat will be, and you can figure out the displacement of your engine. That he ended up with an engine that was less powerful than he needed , because of turbulence losses, he would have no way to know, however; Reynold’s work on turbulent flow would not come until the 1870’s.

No, not a Hollywood ending, with us steaming into  glorious sunset, Rumsey’s boat humming upstream  like a ChrisCraft….but not a failure.  After we had come as close as we could to what our research had indicated Rumsey’s boat was,  it ran just as his witnesses said in their affadavits in 1787. They said, “….it was with great pleasure that we saw her get under way…and move against the current at the rate of three miles an hour by the force of steam…We are well-informed, and believe, that  that the machinery at present is very imperfect, and by no means capable of performing what it would do if completed”.  Imperfect and incomplete it was, and must always be.  We now know it ran, ran as they said it did, and so the Experiment experiment is concluded.
Nick Blanton

5 responses to “The Rumseian Experiment”